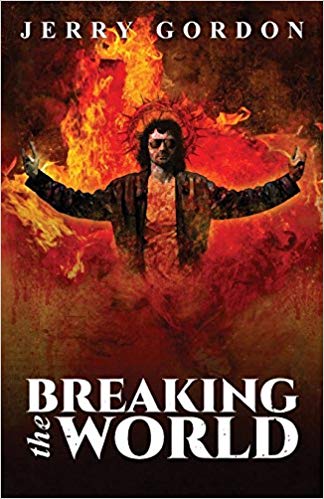 Jerry Gordon’s debut novel, BREAKING THE WORLD, wonders, what if David Koresh, who perished during the FBI siege in Waco, Texas, was right that the apocalypse was at hand?

It’s 1993, and the FBI is laying siege to the Branch Davidian compound in Waco, while the sect’s leader, David Koresh, preaches the end of the world is coming. Cyrus, a teenager living with the Davidians, isn’t a believer, though his mother is (she’s one of Koresh’s wives). With his friends Rachel and Marshal, he tries to find a way out. Then news of a new disease killing people in Mexico emerges, along with a surprising truth. The apocalypse is at hand, and Koresh was right…

This is a good read and a strong debut. I went into it a little on edge, as I’d had a similar idea, though involving a cult de-programmer who infiltrates a cult to get somebody out. Gordon’s re-imagining of the Waco siege is brilliant, though–he gives the idea full expression and historical context. What follows is a very compelling story about belief, liberty, loyalty, and the apocalypse. I had a lot of fun with it, and ended up recommending it for nomination for a Bram Stoker Award.

I had two criticisms while reading it. A minor one was Gore is president and Clinton vice president, as if affirming this is an alternate history, though we really didn’t need it. A major one was the story sort of just ends without wrapping things up. It may be Gordon intends for this to be a series, but each novel should be a complete story.

In the end, Gordon takes a great premise and delivers on it with a really strong and fun read.