I’m a big fan of COBRA KAI and saw the early release of season 3 as a tiny speck of awesome after 2020, before 2021 went off the rails and smashed into a horrific new low for America. I thought the season started off rocky but ended with full punch and heart in an amazing finale episode.

The season starts with the aftermath of the school brawl where all its consequences had to be dealt with. The kids are in big trouble, Kreese is fighting a personal war, and Johnny and Daniel blame themselves for what happened. These early episodes were rocky for me. The writers didn’t compromise the characters, but it felt like they just wanted to get through it, and as a result so did I. Once season 3 gets rid of season 2’s story engine and discovers its own, the result is solid though a bit over the top, as the feud has reached a kinda psychotic level. But the show leans into what makes it great, which is plenty of genuinely heartwarming scenes and its ability to trade on the original movies in a way that has integrity and finds its own identity.

And then there’s that finale. Oh, man. There’s a great amount of action, excellent humor, strong resolutions, great surprises, and a solid setup for season 4. I won’t say more as it’s best to discover it for yourself. Overall, for me, season 3 of COBRA KAI proved the show still has legs and a solid kick. It’s just plain fun. 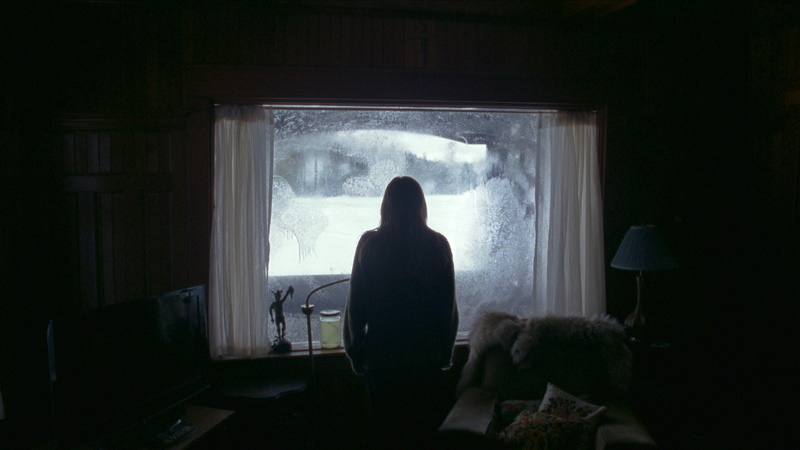 THE LODGE (2019, streaming on Netflix) left with me severely mixed reactions. On the one hand, it’s artistically very well done, and it’s great horror if you define such as breaking boundaries and taking risks. On the other hand, the big twist and reveal is so nonsensical and mean-spirited as to not so much deny willing suspension of disbelief as slap it in the face.

The film sets up a divided family, with Dad dating Grace and wanting his kids to join them for a Christmas trip to a remote lodge. Dad has to leave, a blizzard comes, and then things take a very dark turn for the strange. It’s best to set the film up as generally as possible, so you can enjoy the process of discovery for yourself. The first two acts of the film are handled really well, with plenty of tension, simmering conflicts, and some good acting, particularly by the magnetic Riley Keough.

The conceit of Dad leaving his girlfriend with his kids who clearly resent her struck me as pretty ridiculous, but I went with it, accepting it as necessary for the plot to move forward. When things get weird, the story gets pretty involving, and what’s great about it is there are multiple possible explanations for what’s going on. When the big reveal comes–suggested earlier in the film–it was a surprise to me. It was under my nose, so to speak, but I’d discounted it. The writer in me–I’m no stranger to hurting my fictional darlings–appreciated the choice, though the movie watcher in me rebelled at just how over-the-top mean-spirited and implausible it was.

The film comes in for a very dark finish that has its own twisted sense of justice to it, but the film had already half lost me by that point. So I’m at a loss how to grade this one. There was certainly a lot to appreciate, but in the end its final act resulted in the whole missing the mark for me. As always, YMMV.

I eyed HIS HOUSE (2020) for a while on Netflix, putting it at the bottom of my list as from the trailer it looked like a “typical horror flick but hey, look, the protagonists are refugees, so there’s your twist.” I love it when I’m utterly, stupidly wrong about a first impression and get a beautiful comeuppance. For me, HIS HOUSE turned out to be a nearly perfect horror film that follows conventions while breaking them in just the right way to create something new.

Bol (Sope Dirisu) and Rial (Wunmi Mosaku) flee war-torn Sudan with their daughter and end up seeking asylum in the United Kingdom, where they’re hardly welcomed by the authorities and barely tolerated by the locals. They’re assigned a ramshackle house in a low-end neighborhood. Regardless of the UK not being exactly a friendly environment, Bol, tortured by his memories of slaughter, is determined to fit in and make a new life for himself. Rial, meanwhile, is afraid of their new country, doesn’t feel like she can fit in, and suffers from guilt over the loss of their daughter during the boat ride across the Mediterranean. There’s plenty of drama here alone to carry a film, but there’s more–a malevolent spirit is determined to hold them to account.

Starting with a strong focus on story, what follows is a genuinely scary haunting that plagues a couple we very quickly care about and want to win. Their conflict–about fitting in with English society and what to do about the spirit–is genuine and strong. The message about whether refugees should be accepted in a society is organic and left to the viewer without overt preaching. The brutal civil war the couple escaped is as horrifying as the supernatural elements, and perfectly suggested until some great, emotionally charged reveals. The conclusion is very satisfying.

Overall, I loved it and recommend it. 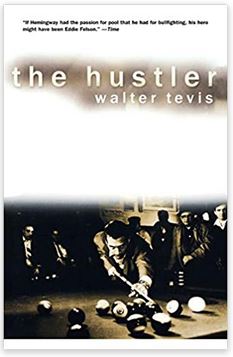 After reading THE QUEEN’S GAMBIT, I grabbed Walter Tevis’s THE HUSTLER, which promised to do for pool what he’d done for chess, which is to say, lovingly portray it as a field of character, a personal test of wills, high-stakes drama, and a kind of violence. THE HUSTLER delivers, though its protagonist Fast Eddie Felson isn’t as likeable as Beth is in THE QUEEN’S GAMBIT, and I just didn’t root for him the same way.

It’s a simple story. After building up a reputation and some cash that would buy him high-stakes games against the best, Fast Eddie arrives in Chicago and beelines to Bennington’s, home field for the best pool players in the country. There, he goes head to head with Minnesota Fats, whom he can beat on the table but perhaps not in a contest of character and wills. Losing everything, he must dig deep not only to raise fresh capital but also find the character and inner strength to go the distance. Along the way, he meets a young woman struggling with her own self-esteem.

Tevis writes about pool the way he wrote about chess in THE QUEEN’S GAMBIT, producing vivid imagery and descriptions and tension to the point of fetish, such that even if you don’t love or play the game yourself, you deeply appreciate it. In fact, this was apparently the first novel written about the game. Regardless of what you think about pool, everybody loves a good sport story about a person who must dig deep to prove themselves and triumph in a difficult game, and many readers find satisfaction in a good story about, well, work–difficult work done well.

While I loved that aspect of the novel, which served as the plot engine and character arena, I couldn’t root for Eddie the way I did for Beth in THE QUEEN’S GAMBIT. Beth was heavily flawed; Eddie is similarly flawed but also kind of a jerk, especially to his love interest, who apparently symbolizes his own self-esteem and character problems. As a result, while I deeply cared if Beth beat Borgov, I didn’t care as much if Eddie beat Minnesota Fats. Nonetheless, I loved the ride and the deep dive into the game. If you enjoyed THE QUEEN’S GAMBIT, check it out. And if you like this novel, you might want to check out the movie adaptation starring Paul Newman. 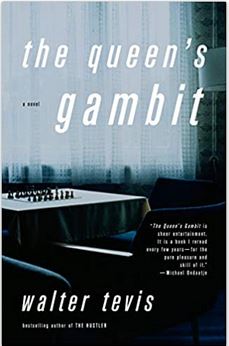 I’d read THE MAN WHO FELL TO EARTH many years ago and remember it as a wonderfully literary sci-fi novel, though a bit meandering and even frustrating. (The movie adaptation with David Bowie stars out well but then loses its mind.) After watching THE QUEEN’S GAMBIT on Netflix, I was surprised to learn Tevis wrote the book on which the series was based, along with some other great adapted stories like THE HUSTLER and THE COLOR OF MONEY. So I checked it out, and here’s the short review: I loved it. This guy can really write.

If you’ve seen the series, you’ll be impressed at how faithful the adaptation is from the written story, though with some significant differences where they made things more dramatic or simpler for the show. After reading a couple of Tevis’s books now, I have to say it’s his best. Beth is a singularly driven woman and a fantastic protagonist, as strong as the show if not stronger, and the descriptions of her chess games and Moby Dick-like fascination with beating Borgov are fascinating to read, even if you don’t play the game yourself.

Overall, like the show, the novel is a great character study and a gripping sports story every bit as riveting as a movie about baseball or hockey.

In 1BR (2019, streaming on Netflix), a shy, insecure young woman flees her doting father after her mother’s death to move to Los Angeles to start a new life as a costume designer. Answering a real estate listing for a one-bedroom apartment in a complex, she moves in to discover herself ensnared by a cult with lofty principles and brutal methods to ensure obedience and harmony. Overall, it’s a solid horror film that reminds us sometimes the scariest horror element is human, including humans who will hurt you believing it will ultimately make you happy.

In some ways, it’s an ordinary horror movie about a cult with few surprises and an unsurprising gotcha in the last scene, but again, in my opinion, it’s a solid telling. It’s a low-budget film but doesn’t feel like it, with competent acting and slow burn if sufficient pacing to the conclusion. I liked how they showed the indoctrination techniques some cults use to brainwash people, though the real thing often goes a lot farther than what’s depicted and is even more horrific. The finale is wonderfully violent, violent in that way that feels real and impactful.

So overall, 1BR is not one I’d gush about, but I liked it a lot, it rings with competence, and I thought it accomplished quite a bit for its resources.