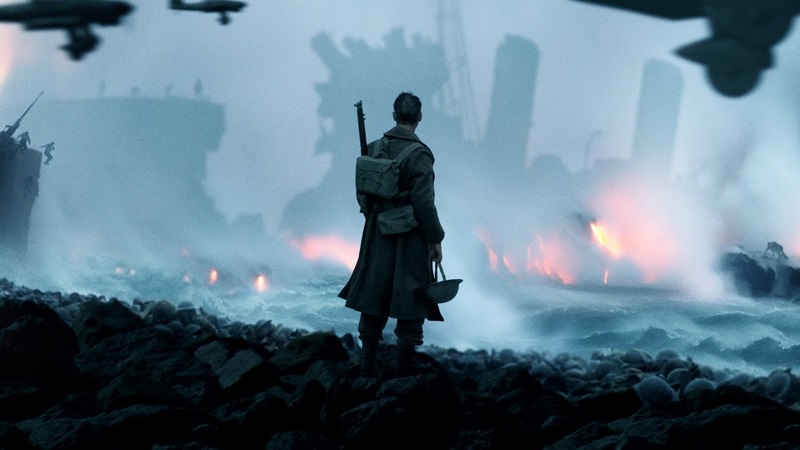 DUNKIRK (2017), written, directed, and co-produced by Christopher Nolan, is a terrific war movie–gritty, realistic, powerful, and with its contrasting themes of forgiveness and strength against all odds introduced where needed, without bludgeoning the viewer over the head. The cast includes Tom Hardy, Kenneth Branagh, Cillian Murphy, James D’Arcy, and others all giving an understated but powerful performance.

It’s 1940, France under massive assault by the German Army, and a breakthrough has forced British and French armies into a pocket at Dunkirk, France. The German stopped their advance for three days to consolidate their positions, giving the allies time to build defenses and evacuate under almost constant assault by Stukas, bombers, and U-boats. If the Germans had succeeded, they would have destroyed the strength of the British Army, around 330,000 men trapped in the pocket. Instead, they lived to fight another day and win the war.

The film tells three separate stories. Tommy, a soldier, makes it to Dunkirk and desperately tries to get out over the course of a week. Responding to a call for civilian boats to aid the evacuation, Mr. Dawson and his friend Peter set out from Weymouth over the course of a day. And in the air, Farrier (Tom Hardy) flies in a trio of Spitfires over the English channel over the course of an hour. These stories are told simultaneously, intersecting during one fateful hour.

The film features little dialogue, relying on an excellent score, sound and practical effects, and action to tell these stories. The music alone puts you on the edge of your seat as characters look at something off screen in blank terror. When the Stukas come screaming out of the sky, intent on bombing and strafing the helpless soldiers on the beach, you share the soldiers’ terror.

As for the soldiers themselves, they’re desperate, conniving any way to get the hell out of there before the Germans close the vise. This desperation permeates their actions, though they’re heroic when they’re able and when it counts. Farrier, in particular, comes across as heroic, understanding if he doesn’t go the extra mile, thousands of other men will die, as does Mr. Dawson, who puts his and his son’s lives on the line to do something small but vital to save the British Army. Despite the soldiers’ shame at their defeat, the ending is authentically uplifting.

In short, I loved this movie and hope to see more like it. Recommended if you like movies that are different. If you like war movies, it’s essential viewing.