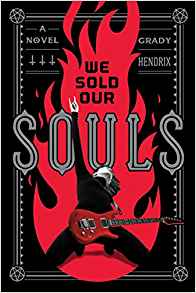 Grady Hendrix’s WE SOLD OUR SOULS is a solid supernatural horror story that also has something to say about the spirit of music. I liked this one a lot.

I first read this author when I came across HORRORSTOR, a story about a haunted IKEA-type department store. I had some trouble with it, but WE SOLD OUR SOULS looked tempting enough to try, and I’m glad I did. The story follows Kris Pulaski, a washed-up, retired guitarist for the ’90s metal band Dürt Würk. The band imploded under mysterious circumstances years earlier, which she blames herself for, while the frontman, Terry Hunt, has gone on to rocket to stardom with a solo career as the “Blind King.” When Hunt announces a farewell tour, Kris seeks out her former bandmates, which sets her on a path back to Hunt, the night the band crashed, and her love of music.

The result is a solid horror story about a deal made with a Lovecraftian race and Kris’s struggle to make things right, culminating in a massive Burning Man-style Satanic concert where she must make her final stand. The straightforward story element is solid, supported by great characters you can love or hate. The story came alive for me thanks to plenty of meat and loving attention to detail about the metal scene and the life of a struggling rock band, an aspect of the novel that gives it a special personality and depth. I liked the theme related to the social forces that seek to rob us of our spirit and how music can help us reclaim it.

I had a few small criticisms, which is I wasn’t sure how the climax (while satisfying) resolved much, and there are media snippets between the chapters that interrupt more than supplement the story. But these were minor complaints for me. Overall, WE SOLD OUR SOULS is a solid, fun supernatural horror story about the power of music.