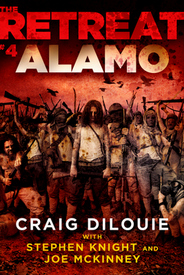 Coming the end of June! THE RETREAT, Episode #4: ALAMO, the apocalyptic/zombie thriller series I’m writing with Stephen Knight and Joe McKinney. I’m happy to return to this series as the author of #4; I also wrote #1. The series was inspired by THE ANABASIS.

During the long retreat out of Philadelphia, First Battalion arrives at High Point Special Facility, the Alamo of the U.S. government. Lt. Colonel Lee secures the fort built around the facility but learns of an outbreak in the underground bunker, where the U.S. government is hiding. The President has been infected.

While thousands of laughing infected lay siege to the base, Sergeant Muldoon, Corporal Rawlings, and a platoon of lightfighters go deep into the bowels of the earth on a deadly mission: terminate the President of the United States.

The President is waiting.

Get ready for another action-packed adventure as First Battalion makes its way to Florida through an apocalyptic America overrun with genocidal maniacs.