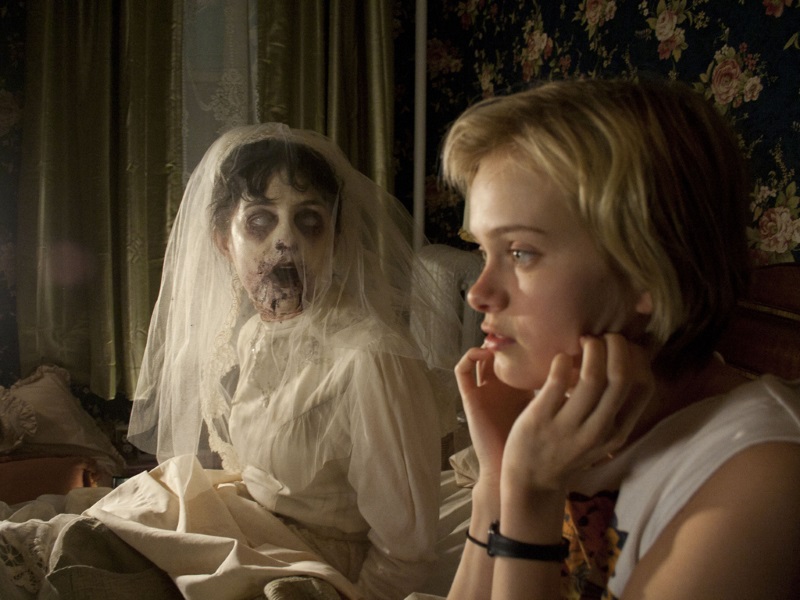 Written and directed by Ti West, THE INNKEEPERS (2011) has a lot of charm and some decent tension but is a bit too sleepy for my taste. I’d enjoyed West’s SACRAMENT quite a bit and wanted to try more of his work.

In THE INNKEEPERS, Claire (Sara Paxton) and Luke (Pat Healy) are working their final days at the Yankee Pedlar Inn, an old hotel that is about to close its doors. Luke is trying to make a buck on a website about the hotel being haunted, enlisting Claire’s aid to help him ghost hunt. Their main objective is capturing evidence of Madeline O’Malley, a bride who hanged herself after being jilted at the altar and whose body, according to legend, was buried in the basement by the hotel owners. During the long weekend, the hotel is mostly deserted, giving Claire ample opportunity to stir up the ghosts and potentially get herself into something she can’t handle.

As I said, it’s a charming film. Claire and Luke are likeable characters, and plenty of screen time is given to them bantering and going through their routines until they bump into the haunting. These little bumps escalate over the course of the film, but they’re very slow in coming and not very scary (relying on jump scares to make the point), and the core mystery of what happened to O’Malley is never really explained.

Overall, I liked it but didn’t love it. West managed to do a lot with very little with this film. The hotel was creepy, the characters were likeable, and I was interested in what happened to them, but in my view the film is a bit too slow and doesn’t deliver quite enough of a satisfying punch at the end.