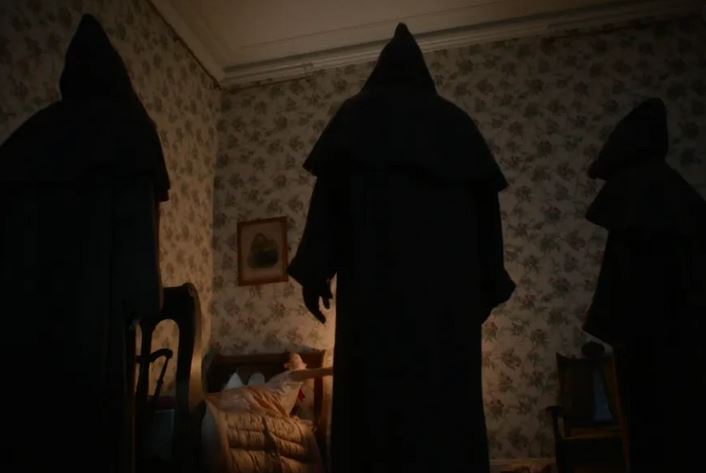 THE BANISHING (2020, streaming on Shudder) is a competently done haunted house thriller with a few David Lynch-style elements thrown into ratchet up the tension, and despite great sets, solid performances, and a decent creep factor at times, it all comes in for a fairly rote if jumbled conclusion with a strange, left-field denouement that may leave some wondering.

It’s the 1930s, and Linus, a pastor, moves into a church with his wife Marianne and daughter Adelaide. Unknown to them, the previous pastor left his post under grisly circumstances, and locals, including occultist Harry Reed (played in intense scene-chewing fashion by Sean Harris), believe the house is cursed. Reed knows its history, including the dark monks who once practiced there. Told primarily through Marianne’s view, we see the family slowly get torn apart by the house, demanding Marianne use every bit of strength she has to resist and reclaim her family.

It’s all good haunted house stuff, and the film plays it with some terrific strengths, notably great sets, a backdrop of England on the eve of war with Germany, a nice mystery about the house, and some solid acting, again notably Harris. There are some odd, almost jarring David Lynch-style effects laid on in the beginning, which help set an off-kilter tone.

As the film wears on, however, the climax allows some very convenient problem solving and brings the film in for a very soft landing in which too many things are left unexplained. Then there’s a denouement that simply did not pay off for me. We don’t really get to know any of the major characters as well, and they don’t have character arcs where they have a flaw that must be corrected to survive, leaving significant storytelling stakes on the table and flattening the film’s emotional effect.

Overall, though, I think it’s fairly well done, and if you treat it as a cozy haunted house story and keep your expectations in check, it’s pretty solid and worth a watch.