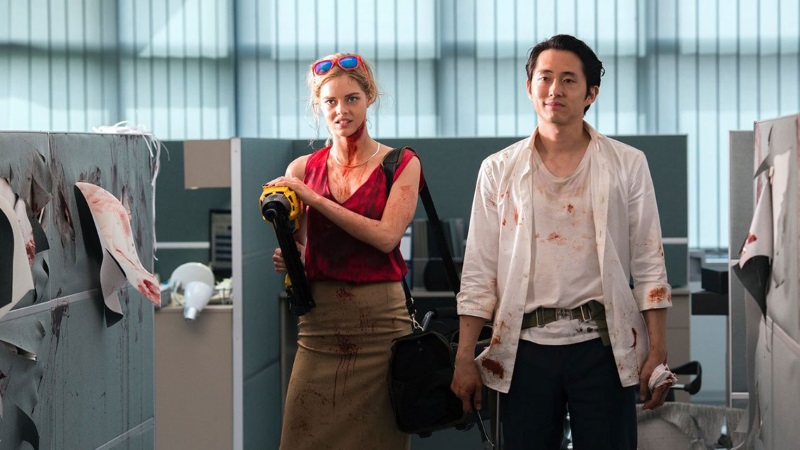 In MAYHEM (2017), a mid-level executive consultant named Derek (Steven Yeun, shining in the role) plays a part in screwing over Melanie (Samara Weaving, bringing a hilarious intensity to her role as well), a homeowner who is losing her home, only to find out he’s getting screwed himself by the company he works for. Three people play a big part in his career destruction–the Siren, a highly political executive; the Reaper, the director of human resources; and the brutal CEO. Derek refuses to take the fall for the firm’s error, only to face even worse personal destruction.

This horror comedy is a really fun movie that reminded me of BATTLE ROYALE, ZOMBIELAND, and THE BELKO EXPERIMENT. The comedy is physical, though there are numerous comical asides that made me laugh out loud. The violence is mindless, remorseless, almost cartoonishly over the top. I particularly enjoyed how everybody in the film basically goes on doing what they were doing in the workplace–abusing each other, screwing each other over, lust and hate and competition–but now they’re doing it honestly, with weapons. White-collar workers hurt each other all the time in an environment that is ultimately thoroughly dehumanizing, but strangely, by doing it out in the open with violence, they somehow become more human than they were before the virus got them.

MAYHEM never achieves greatness, but it competently does exactly what it sets out to do, which is entertain the crap out of you with, well, mayhem.