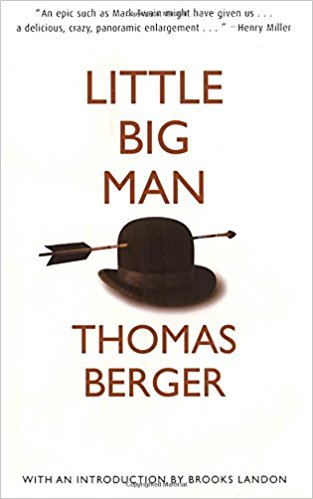 I grew up watching LITTLE BIG MAN starring Dustin Hoffman and Faye Dunaway, which I’d enjoyed several times, and finally got a chance later in life to read the even better novel by Thomas Berger. Berger is a great novelist; another one of his books got made into the movie NEIGHBORS starring John Belushi and Dan Aykroyd.

The novel is similar to George MacDonald Fraser’s terrific Flashman series. Both present picaresque tales, picqaresque meaning fiction that presents the adventures of a roguish hero, usually told in first person and combining realism with comedy and satire. While Fraser turned popular conceptions about popular Victorian figures on their head for comedic effect, Berger does same for the American West, relying on overlooked historical documents such as diaries, memoirs, and letters as research for his account.

The novel presents the reminisces of Jack Crabb, a 121-year-old man who’d come out West with his family as a boy, been raised by the Cheyenne after losing his father, and then finds his way around the Old West crossing paths with many well-known historic figures, such as Bill Hickock and George Armstrong Custer. Through twists of fate, he often finds himself crossing over between the native and White worlds, though never finding a home in either one. As with the Flashman series, non-Whites are talked about as they were during the times depicted, which may offend some, though Berger’s Jack Crabb is an equal-opportunity cynic about people and cultures, being on the outside of both worlds.

Berger’s story is well told, irreverent, and hugely entertaining. I loved it and recently ordered NEIGHBORS to give a try as well.