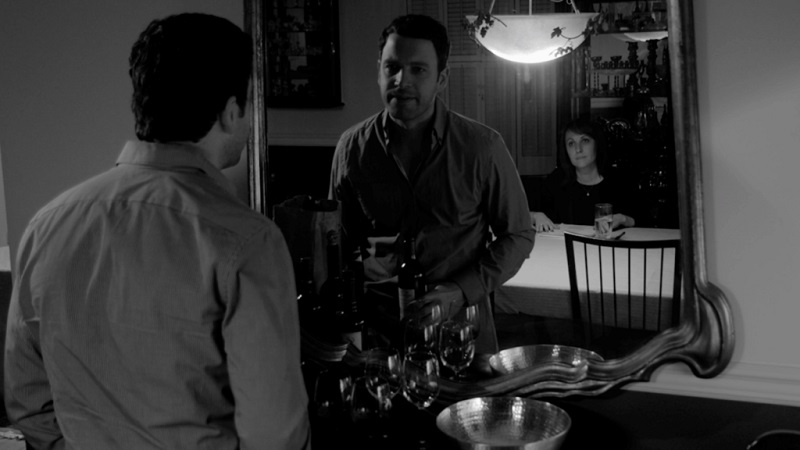 Streaming on Shudder, EMPATHY, INC. (2018) is a sci-fi story about exploitation with a throwback feel. Despite some big plot holes, the story comes together with some nice reveals and a final act some critics hated as a hot mess but I thought was fairly strong.

The story begins with venture capitalist Joel seeing an enormous deal implode due to fraud. He and his actress wife Jessica are forced to move in with her parents back east to start over. Bumping into an old friend, he finds out about an extraordinary new deal for a startup centered on “extreme virtual reality,” or VR. For a short time, you can be somebody underprivileged and walk a mile in their shoes, giving you a new perspective on how good your own life is. But Joel soon comes to understand what he’s invested everything he has left in–including money that isn’t his–isn’t exactly kosher, with a tech that is far different and far more menacing than what he’d believed.

The film is shot in black and white, giving a noirish, retrofit feel to it similar to PI and lending it a touch of gravitas. XVR is a crazy technology but is presented in a fairly mundane and low-tech way, similar to what ETERNAL SUNSHINE OF THE SPOTLESS MIND achieved with its memory erasure. Joel is as sympathetic as the plot (which has him making a huge and obvious mistake) allows him. There are some big plot holes, as I said, but if you stick it out to the final act, things really pick up and come together. Overall, while it didn’t pull off its full range of ambitions, it reached for something big, and I liked it for that, it’s different than the usual fare.