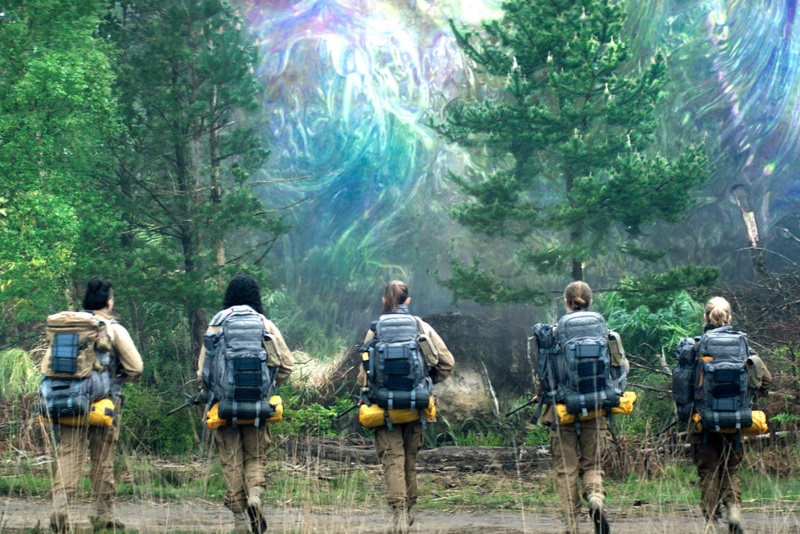 While it appears to aim for the gravitas of ARRIVAL, ANNIHILATION (2018) doesn’t quite make it, but overall, it’s a solid sci-fi film I enjoyed quite a bit.

Based on the novel by Jeff VanderMeer but having more in common with HP Lovecraft’s story “The Colour Out of Space,” ANNIHILATION presents us with a terrific mystery. An extraterrestrial object fell from the sky and struck a lighthouse, producing a psychedelic shimmering haze that is expanding across the landscape. Among the expeditions that went in, there were no apparent survivors until the husband of a biologist named Lena (Natalie Portman) surfaces at their home after being missing a year. After he collapses into a coma, Dr. Ventress (Jennifer Jason Leigh) recruits her and three other women to journey into the shimmer to try to discover its source. As the shimmer is steadily expanding, a lot is at stake for the world, but for Lena, she wants to know what happened to her husband and make up for a betrayal.

The women’s trek through the corrupted wilderness is great, with plenty of weirdness that is eventually explained with an engaging reason. The creatures and bizarre landscapes they encounter, and the steady degradation of their minds and bodies, are convincing and compelling–most of all the fact the ET appears to be more a mindless phenomenon than an intelligence. Where the film falls flat for me is in the characterization. The women are all broken in some way, mirroring the corruption of the shimmer, but none of them are particularly likeable except possibly for Dr. Ventress, whose monotone coldness oddly makes her the most interesting of the group. Lena’s husband is strangely miscast. He’s a fine actor, but he and Portman offered up zero chemistry. If he’d been jolly and less cold, their relationship would have been far more interesting, and it would have offered up a great contrast against the current coldness among all the characters.

The ending is particularly fun. The mystery of what happened to Lena’s husband, the confrontation with the source, the bizarre landscape, Lena confronting the “alien,” all of it was done in an intelligent way. The final reveal is typical Hollywood, but it didn’t detract from my enjoyment. Overall, it’s a top-notch sci-fi film.