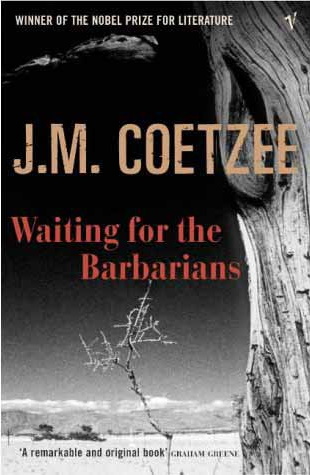 In WAITING FOR THE BARBARIANS by J. M. Coetzee, a Magistrate tells a story about colonialism in a rich, elegant narrative.

For years, the Magistrate administered a frontier outpost and town as a loyal official of the Empire. Now getting old, he spends his time running things, digging up artifacts of an earlier civilization at a nearby site, and watching his body decay with quiet alarm. When secret police arrive to question a barbarian prisoner, the Magistrate witnesses the Empire’s penchant for cruelty, which boils into hysteria and war with the desert tribes. Distraught by the pointless violence and conflict, he stages a small act of rebellion that makes him an enemy of the Empire.

This is a novel about colonialism, but really it’s about the conflict between law and justice. Being a man of conscience, the Magistrate is a poor instrument of Empire, whose servants abuse their power in service to the law to the detriment of justice. The Magistrate chooses justice–chooses humanity, his own and others–and thereby makes himself an enemy, as for both the Imperial status quo and a war to work, the barbarians can’t be seen as human, must be called and be regarded as “barbarians,” a lower form of life. And by making himself an enemy, the Magistrate’s own humanity must be stripped away by the state.

Reading WAITING FOR THE BARBARIANS after watching the screen adaptation, I found myself hearing Mark Ryland’s voice telling me the story, not an unpleasant experience as I love the actor’s work, particularly in this film. In the movie version, the Magistrate represents the best of human conscience, offering a human but something of a naive Christ figure. In the book, he’s much more flawed, highly focused on his aging body and relationships with women, which extends to an ambivalent sexual relationship with one of the barbarians that goes on for quite a while to the point of feeling like a long bird walk. His power over her and struggles with how he sees her and what he wants, in my view, actually kind of muddies his part in an otherwise crystal theme.

Overall, I loved the book. It’s beautifully written, has a natural first-person narration style, and is thematically striking. My only significant criticism is that it could have been much more economical in the telling. For me, the long digressions about the Magistrate’s midlife crisis and complicated relationship with women aren’t really needed and extend to the point of being distracting. In this, the film did it better in my view, holding onto the thematic focus.