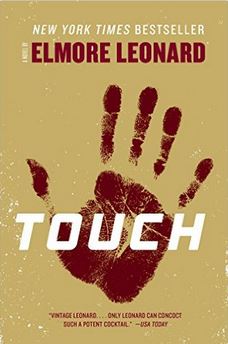 While at Crypticon earlier this year, Chris and I found a terrific little bookstore in downtown Seattle, where I lucked into finding TOUCH by Elmore Leonard.

The premise looked terrific. Originally published in 1987, TOUCH tells the story of a young man who has the ability to heal people by touching them. While the man doesn’t claim to be any Messiah-like figure and has no particular message, he draws religious hucksters, fanatics and media leeches who all want to either destroy him or make him a symbol of their own particular beliefs.

While TOUCH is different than Leonard’s other works, it’s still classic Leonard, containing the elements Leonard fans expect, from crackling dialogue to going deep with interesting characters. The story plays out fairly predictably, at least until the end, which I found surprising, though the journey is a deeply enjoyable ride.