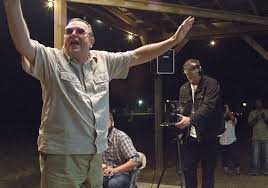 THE SACRAMENT (2013) tells the story of three journalists who journey into a cult. It’s one of the best horror movies I watched this year.

Photojournalist Patrick, who works at VICE, receives a letter from his sister Caroline, whom he hadn’t heard from in years. Caroline was an addict and apparently a very messed-up individual before finding peace in a religious community. The community has moved to another country. Patrick accepts her invitation to visit and takes along Sam, another journalist, and Jake, a cameraman, to document the reunion and Caroline’s community.

As I said, it’s a good movie. Here’s a detailed review, though I think you should skip it and just go watch it knowing as little as possible about it.

The tension starts to mount the moment they get there. A helicopter ride, a long drive through remote woods, camp guards with automatic rifles. Once they get in, they find a thriving, self-sufficient community that lives close to God and the earth. Happy people who have given up everything to live a pure life free of injustice, poverty, racism and war. The residents worship Father, the group’s leader, brilliantly played by Gene Jones. 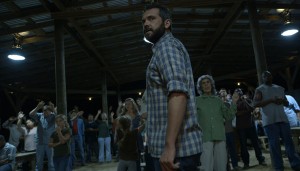 But things aren’t as pleasant as they seem. Many of the residents aren’t happy. They hint the community is actually a prison, and those who disagree with Father are subjected to brutality and abuse. They want to leave, but they can’t. And they think the journalists are their ticket to freedom.

SACRAMENT is in the “found footage” genre, but it’s not annoying. The camera work only gets shaky when people are in danger, and it rarely feels contrived. Director Ti West uses the genre to his advantage, allowing the characters to talk directly to the camera, but otherwise avoids the irritating tradeoffs.

The film is a slow burn. It takes a long time for the action to begin, and when it does, it explodes. The tension that builds getting there is unbelievable. You know things are going to get bad, but you’re not sure how far it’s going to go. The three men are likeable, and you really start rooting for them to somehow get out of this. The acting is good, the script solid. The cult leader (again, perfectly played by Gene Jones) is fantastic. Father is soft spoken and compelling but also very menacing. The guy is a happy, coiled snake. The story unfolds in a very realistic manner. You keep thinking this could actually be happening.

The movie borrows heavily from elements of the Jonestown massacre involving the Reverend Jim Jones. For example, the Eden Parish in the film is smaller but otherwise a replica of the Jonestown community. 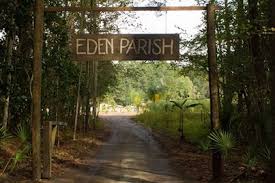 You can see in Eden Parish the good and the bad. The good being that people found a way out of a horrible dead-end life into a loving community where they have value. The bad being the regimented lifestyle governed absolutely by a charismatic man who over time became a megalomaniac. The media portrayed the film as a warning against religious extremism, while the conservative National Review predictably but laughably considered it an indictment of leftism. In my view, it’s neither. The ideals of the cult are a tool, not the weapon; the weapon is the price that ultimately must be paid to join and stay in the community. What this story is really about is people who have little hope and sense of value becoming seduced by something that appears to be perfect and satisfy them–but at a price of loss of freedom of thought and action. There will always be people like that, and there will always be people who offer them hope and satisfaction in exchange for, well, everything they’ve got.

I had a few complaints about the film, notably about how we don’t see one of the protagonists after he’s captured, and therefore we lose touch with the horror of the film because as a very likeable character, what he felt, we felt. In storytelling, they call that a pinch point–a point in the story where you really turn the screws on a character to make the viewer feel what he or she feels. There’s at least one major pinch point, but West missed an opportunity there, in my opinion. I really wanted to know what was happening to that guy when everything goes to hell. A lot more could have been done with the protagonists. It’s a funny thing to say, and I’m no fan of movies that are basically torture porn, but the protagonists honestly could have suffered more. I can’t say more as I’m already getting close to spoilers. See the film yourself, it’s worth it.

I highly recommend THE SACRAMENT for those who like horror and are looking for a pleasant surprise in a found footage film.

Here’s the trailer, though again I recommend you skip it and just watch the movie instead: