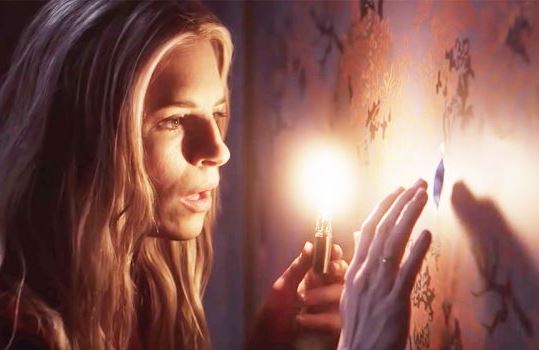 At the end of 2016, I caught THE OA (Netflix original), a trippy sci-fi series with strong spiritual and a few horror overtones, and quite enjoyed it. Season 2 was a long time coming but worth the wait, delivering some answers while continuing to challenge with its trippy ideas.

In THE OA, Prairie Johnson (Brit Marling), a blind woman who went missing seven years ago, resurfaces in a public suicide attempt. She survives, and now by some miracle she has regained her sight. Back at home, she recruits five people to hear her story about being held captive by a scientist nicknamed Hap (Jason Isaacs), a psychopath obsessed with discovering evidence of an afterlife by subjecting his subjects to temporary death states to capture their near-death experiences. Instead of an afterlife, Prairie discovered a way to travel between dimensions revealed through “movements,” a strange dance that must be performed with perfect intent and feeling. At the end of season 1, Prairie is hurt. What happens next?

Season 2 opens with Prairie awaking in a hospital bed, but she is no longer Prairie, as her father hadn’t been killed during her childhood, she’d never been in an accident that resulted in her losing her sight, and she was never adopted. The dance worked; she is in an other dimension similar to ours but with some distinct differences. Hap and the other people from the experiments are already in this world, and now she has to find them. This story line is joined by two others that increasingly weave together, one involving a PI hired to find a missing girl, which takes him into a strange game and a house that holds a bizarre mystery; and the other involving the people the OA left behind in the other dimension, who have to find it in themselves to get to Prairie. All three plot lines are equally strong.

As I said, the show is trippy, but it always takes its crazy subject matter just seriously enough, and it is revealed so organically, that the show never quite jumps the shark the way LOST did on an almost constant basis. If something crazy happens, it isn’t because Brit Marling wants you to watch the next episode but because it is integral to a complex, developing plot. For that, I have to give it respect, and while in the end it was all a bit much, including a very meta finale, I really enjoyed it, and I’m anxiously awaiting season 3.