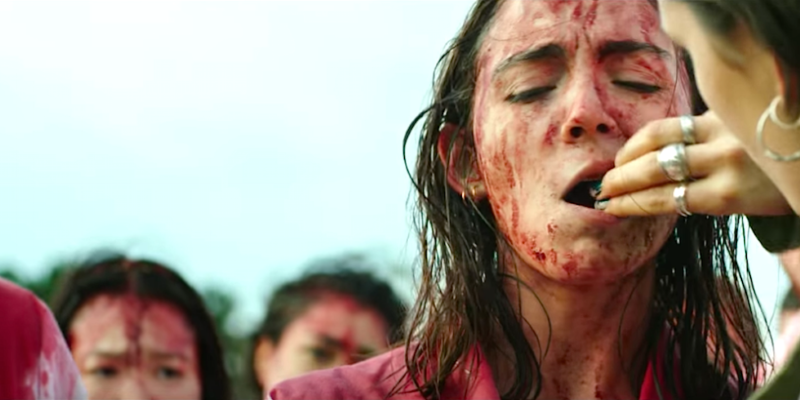 RAW (2017) is a French film about a young woman’s awakening that happens to include a genetic desire for human flesh. A strait-laced and innocent vegetarian, Justine is attending her first week of veterinary school, following in the footsteps of her parents and more experienced sister Alexa. The week includes heavy hazing, drinking, partying and sex, students trying to fit in within a brutal academic and social environment. In one humiliating ritual, the freshmen are splattered with animal blood and required to eat a sliver of raw meat, in Justine’s case a kidney.

This taste of meat awakens her desire, a deep and all-consuming hunger for human flesh. She tries to satiate it with alcohol and sex, but it’s a losing battle. Her older sister Alexa wants to guide her through it, but Alexa’s domineering nature and Justine’s resistance combine to set their sibling rivalry ablaze.

Still, RAW has real strength, visually compelling, constantly intriguing and occasionally gross. It’s a coming of age story about a girl discovering herself, exploring her desires and asserting herself in the world–with cannibalism functioning both as metaphor and a very real thing. It’s also a film about love–the sisters’ rivalry appears to stem from both Justine asserting herself and the sisters loving each other so much it compels them to provoke excuses to bite. About loving so much you want to eat, about loving so much you’re willing to be eaten.