Darren Aronofsky’s MOTHER! recently came to Google Play, giving me an opportunity to rewatch it. It was even better the second time around, particularly since I started the movie with a Biblical interpretation of the story, which I’d discovered about a third of the way through my first time. Here’s my take on the film, which contains spoilers.

At the start of the story, we have the poet (God) reconstituting the world from ashes. The poet (“Him” in the credits) and Mother (representing Earth, or nature) live in harmony until Man arrives professing to be an admirer of the poet. This is Adam, who in this story is a bone surgeon (rib reference) with a surgical scar over his ribs. Then Woman arrives (Eve), a seductress fascinated with the poet’s study where he does his writing (Eden), particularly a large and beautiful piece of crystal (the apple). Man and Woman break the crystal, which gets them expelled from the room and locked out (banishment from Eden). Despite them being nothing but trouble, the poet finds them inspiring and seems to depend on their adoration.

Since their arrival, Mother is struck by visions of ashes returning to the home, foreshadowing but also a buried memory, and when she places her hand against the walls of the house, she senses cancerous cinders infecting a heart, which is really her own heart. She discovers an ominous sealed-off room in the basement which houses the oil tank (Hell, the dark flip side of paradise, a foreshadowing of the coming apocalypse). They’re extremely rude to her, giving all their love and praise to the Poet while ignoring or belittling her, and making a mess everywhere they go. Then their sons show up (Cain and Abel). One son kills the other, and the poet slams him against a piece of glass, cutting his forehead (the mark of Cain). After the funeral, Man and Woman and all their friends show up, all of whom are amazingly rude to Mother in her own home, putting the worst of human nastiness on display. When the people break an unfinished sink, which floods the house, Mother banishes them. The house is wrecked, and it’s raining outside, but the people are gone. This is the Biblical Flood.

The poet and Mother make love that night and conceive a child, and all is harmony for a while. Mother is happily pregnant while the Poet has rediscovered a passion to write. His new work draws adoring worshippers from all over, who start to trash the house. Mother sees a blood stain on the floor (from Abel’s murder) reappear like a diseased wound, as humans are back. The film’s subsequent last act is completely surreal as we see humanity in all its extremes, dancing, joy, worship, religious evils, war, poverty, destitution, and hypocrisy. Soon it’s hell on earth all over the house. Tormented and horrified, Mother begins having contractions, which strike like earth tremors. The poet reopens his study and brings her inside, where she delivers a son. 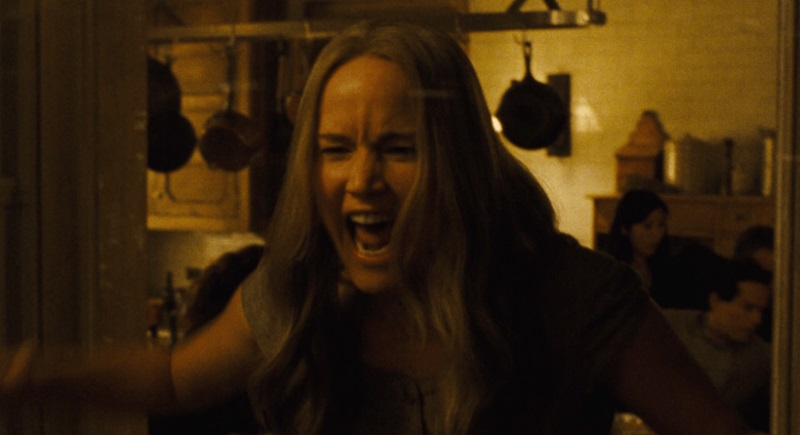 The poet wants to show the boy to the people in the house, who have been leaving them gifts outside the door, but she refuses, not trusting them. When she finally falls asleep, the Poet takes the baby to the people outside, who handle him so roughly they kill him. Mother pushes through the crowd to discover they are eating him in a ritual. The baby, of course, is Jesus, and the ritual a version of the Last Supper. Mother goes berserk until she’s severely beaten to the point of almost being unrecognizable.

In a blind rage, she goes to the basement, where she breaks open the oil tank. Holding a lighter, she tells the poet he never loved her, he only loved how much she loved him. Then she burns the house and everyone in it (the apocalypse). The poet takes her ravaged body to the kitchen. She tells him she still loves him, and this allows him to take out her heart (her love) and fuse it into a large and beautiful crystal. Using that crystal, he is able to regenerate the house and the surrounding paradise, producing a new Mother. He will try again. His creations and what they do to their world don’t matter, only that they adore him.

MOTHER! presents God as narcissist, humans as nasty monkeys at best and a plague at worst, humans as focused on the spiritual rather than their environment, and Earth as living, giving, nurturing mother who is snubbed, scorned, and abused in turn by its children who depend on her for life.

The film has a brilliant message, is beautifully shot, and contains a raw power I found completely compelling. It was one of my favorite films of 2017.