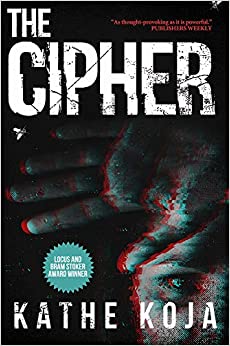 Celebrated speculative fiction author Kathy Koja’s THE CIPHER has a terrific premise: after a party, Nicholas and Nakota, a dysfunctional couple, end up in the storage room of his crummy apartment building and discover a strange and utterly mysterious black hole in the floor. He’s obsessed with her, and she’s obsessed with it, while it appears to be obsessed with him, setting up a creepy and bizarre love triangle of sorts. It’s kind of like the horror version of Jonathan Lethem’s AS SHE CLIMBED ACROSS THE TABLE.

I’d never read Koja before, and she can really turn a phrase. Large parts of the book read like the stream of consciousness of a mad genius. The central conflict of the love triangle is engaging, the obsessions interesting, the core mystery of what the hell the “Funhole” is and what’s in it hooking me from the start, particularly the early crazy experiments they conduct to study it. There’s a theme somewhat teased of people filling empty lives by projecting and searching for meaning. And the horror element packs a ton of satisfying creep.

Two things didn’t work for me as a reader, however. First, only two of the characters out of what grows into a large cast are remotely likeable, and our narrator, Nicholas himself, is so negative about everything the story goes from a heroin chic to a serious downer vibe. As for Nicholas, he has no real agency despite constant attempts to gain control–mostly floundering and waffling–and none of the characters changes or grows to offer a character arc. Secondly, the second half of the book is majorly repetitive, leading to an ending that is inconclusive and lacking all the answers, which is fine, but offering no real resolution, which I found disappointing.

So all in all, I had a strange mixed reaction to this one. I loved the first half and didn’t want it to end and then grew impatient wanting the second half to be over. As a whole, it’s heavy, it’s dark, it’s creepy, and it’s periodically titillating and even beautiful, but it missed some vital elements for me that would have made it a perfect horror read. So THE CIPHER might be a love or hate read for some, though regardless of whether you love or hate it, you have to admire the singular identity Koja creates for it and the skill and craftsmanship that went into it.