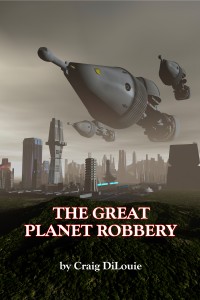 Two soldiers, weary after years of fighting for the Federation, have figured out a way to get rich.

They will rob an entire planet.

Colonial Marines Lawrence Dobbs and Timothy Muldoon are the last of a dying breed of adventurers in a Federation that has tamed dozens of wild planets and is increasingly becoming civilized. When an old astronaut offers to sell them a map that will take them to a legendary planet promising rivers of gold, Dobbs and Muldoon recruit a crew of misfits for one last great adventure. They soon realize they haven’t discovered just gold, but the very secret of alchemy. To keep it, they must fight millions of hostile natives, a team of elite bounty hunters, a combat-assassin android named Bova, and the emperor of a long-dead civilization.